If you’ve ever wished for a pet dragon, if you’re up for a big challenge and if you have the space for a very large tank, keeping an arowana may be a rewarding experience for you. The arowana is a fascinating creature from South America – a truly unique animal, differing from any typical freshwater aquarium fish.

The most striking behavior of this aggressive carnivore is its leaping ability. In the wild, they feed extensively in the flood season, when river and lake levels are high, and the water surface gets closer to the branches of trees. Arowanas can jump as much as three feet out of the water to capture insects in their mouths. Special care must be taken to accommodate this natural tendency when you keep them in captivity.

An arowana can grow up to 48 inches – four feet – long in the wild. So, the experienced aquarium hobbyist will likely keep one Arowana in one very large tank. Imagine the space it will take for one of these fish to turn around and you can image the size of the tank required to keep one comfortably. Expert hobbyists recommend 240 gallons and 2 feet width and depth.

Arowanas are truly mystical creatures. It’s estimated they have been part of our planet for more than 100 million years. As such, they have a primitive appearance with large scales, a bony tongue and sensitive, dark barbells that give it a striking appearance. You may hear them referred to as Dragon Fish or Monkey Fish.

Whether you have the capacity to keep them indoors or the climate and space to keep them in an outdoor pond, you may enjoy the challenge of one of the most unique and special aquatic creatures you can introduce to your home.

Before we venture in to the special care and considerations for this magnificent fish, it’s important to note that most arowana species are illegal to sell, transport or keep in the United States and many other countries. Research carefully and work with your source when seeking the right fish for your home. All Asian Arowana are illegal in the U.S. – this article will focus on the two South American species. They can also be very expensive – it’s not unusual to spend several hundred dollars for a healthy specimen.

Arowana are large, blade-like fish with big scales and a prehistoric appearance. They have strong, spiky fins. The most common South American Arowana are a shiny silver in color. They may have darker scales towards the top of the body and may take on a green or blue iridescence.  The black arowana and darker specimens can tend toward the brown or coppery colors. They can also appear almost red or golden with highlights on the large scales that reflect light. Like many surface feeders, they have a mouth high on the top of their body, plus two dark barbells that reach out from the mouth, off the lower lip.

What size are arowanas when they’re young?

When juvenile arowanas are purchased they are 2 inches to 7 inches long. Purchasing them as adults can be relatively expensive, but you can find them up to 36 inches long. A young arowana can thrive in a 60- or 75-gallon tank, but they will outgrow it quickly. Be ready to introduce them to a tank of more than 100 gallons relatively quickly.

How fast should you expect arowanas to grow?

Arowanas will grow quickly, reaching a foot in length within a few months. They will grow to full size over their lifespan, which can be ten to fifteen, and sometimes twenty, years. 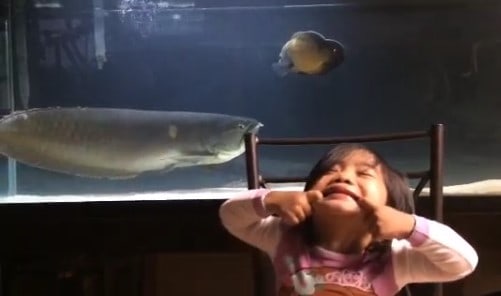 Here’s a photo of my arowana in my 240 gallon tank next to my daughter. It’s around 3ft.

Arowanas usually grow to about four feet in the wild, but three feet is more likely in captivity. Depending on your tank conditions and the longevity of your pet, you may be able to keep them comfortable, even at a very large size. By the way, that can mean a size of about ten pounds in weight.

The two South American Arowanas – legal in most of the U.S. — are Osteoglossum Bicirrosum and the Osteoglossum Ferrerai, the Silver and Black Arowana, respectively. Other species include Asian varieties such as Scleropages formosusan African Arowanas, Heterotis niloticus. Or the Australian arowana Scleropages jardinii, and Scleropages leichardti. Many of these species are much more colorful, including bright orange, green or red bodies. You may only be able to see them in zoos and public aquaria, because their sale, transport and keeping are tightly restricted. Some arowana are endangered, especially the Asian Arowana, so they must be protected.

What do Arowanas eat in the wild?

Arowanas live in flood plains, where they thrive primarily on insects and other small animals. You can find videos of these impressive fish leaping from the water and plucking large insects off of tree limbs. They can also eat fish, amphibians, arthropods and have even been known to eat mammals and birds.

As your arowana matures, you will likely feed it twice a day. You may choose to combine feedings of commercial pellets – if they’ll accept it — and live food. You will protect your pet by keeping it well fed and less likely to jump from the tank.

What foods are recommended for Arowanas?

Some Arowana rarely feed on anything that is not living. In fact, many adults refuse to eat non-live food. Insects are the most natural food source for this fish, but shrimp, snails, crabs, frogs, and feeder fish are also possible. They are natural surface feeders, so worms, larvae and insects that stay at the top of the water work well.  It’s best to purchase healthy live food from a good source.

With live food, you’ll always risk the possibility of passing disease from the prey to the predator, so commercial pellets are helpful if your pet will eat them.

In its natural habitat, an arowana lives in the flood plains. A large tropical freshwater arrangement is necessary. Some of the most beautiful arrangements include large ponds with many live plants and waterfalls where multiple large aggressive fish can thrive.

Experts recommend 240 gallons although you may be more likely to find a standard 125-gallon or 150-gallon tank and that will keep most of them happy.

As soon as an arowana feels restricted, you may experience their leaping ability first hand – they are likely to try to leap for deeper waters.

Inside, a lid is required to keep your pet in the tank. It should be locked or weighted to stay in place. However, they can injure themselves on the lid, so it’s best to keep them comfortable and well fed to prevent leaping.

Tropical freshwater is required to keep arowanas, maintained at 75° to 82°F. You will want to keep a healthy, clean water with a pH 6.0 to 7.0 and a of KH 1-8. The most important aspect of the water conditions is cleanliness. With the level of live feeding taking place in the tank, efforts to keep the tank clean are essential.

Arowanas have big appetites and can be messy eaters, so frequent water changes and cleaning is required. It’s recommended that any uneaten food is cleared from the aquarium and that you perform water changes more than once a week.

Arowana are large, aggressive fish and they will thrive with an aggressive current in the aquarium. Invest in a strong filter that creates a strong flow. Your pet will appreciate the environment.

Arowanas are active and semi-aggressive. The most important consideration is to give them swimming lanes so that they can patrol the tank and strike at the food you provide.

You should be able to keep large items in your tank such as rocks or pieces of aquarium wood. It’s also very good to provide live plants and a degree of hiding places. Arowanas can be skittish, so a level of privacy can give them a sense of control over their environment. Be careful to not place anything sharp in the tank because their barbells are sensitive and prone to injury, especially when startled.

Using subdued lighting and placing the tank in a quiet area can also help your arowana and prevent startling your pet. 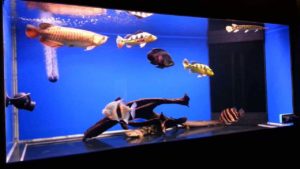 Many arowana owners keep Plecostomus or semi-aggressive catfish in the same tank as an arowana to help keep the tank clean. If the aquarium is large enough, cichlids and other somewhat aggressive fish can get along. Many experts feel it’s best to introduce the arowana to the tank first and allow them to establish a home before introducing other fish to the environment.

Here are some possibilities that hobbyists have had success keeping together with arowanas:

Because of their size – one of the larger aquarium fish kept – they are often the only fish in their tank. However, there are several species that can get along with arowana.

How to Keep Arowanas Healthy

Common diseases to look out for with arowanas

Arowana are prone to eye problems in captivity. Fatty foods and a diet of non-living animals can cause the fish to develop Drop-Eye. Some feel that feeding on non-living animals allow them to direct their gaze downward and to become cross-eyed, but experts feel it has much more to do with diet. A healthy diet of live prey can help to keep them thriving.

Any of the common tropical fish diseases can also infect your arowana, such as ick or ulcers. Specialized treatments that are suitable for arowana are necessary to deal with these problems. You will need to consult a veterinarian or specialist. Keep an eye on their scales to watch for infection.

With any aquarium fish, the best way to prevent or cure diseases is with good water quality. Many illnesses can begin with the stress of an ammonia or other chemical build up in the water. Frequent testing, water changes and water treatments when necessary are important. And because arowanas are messy carnivores, this need is definitely more acute.

Good luck. Arowana rarely breed in captivity, even in zoos and public aquaria. If you wanted to venture into the pursuit, their behavior is fascinating. The arowana is a live breeder and the eggs are carried to maturity in the mouth of the male. When breeding has been successful, zoo keepers have extracted the fry from the mouth of the male arowana, holding the large fish in their hands.

Arowanas are called Dragon Fish, probably because of the frightening barbells that protrude from their bottom lip. They are also referred to as bony-tongue fish because of the bone in the bottom of their mouth that they press to the top. Some will call them Monkey Fish maybe because of their hunting and leaping ability. They can survive for a period of time out of the water because of their swim bladder.

In the wild, arowana feed extensively during flood seasons, when water levels are highest in their native habitat. Tree limbs that are usually high above the water surface become accessible during these times. Naturalists have captured video of arowanas leaping out of the water to feed on large insects and small animals in the branches.

Is an Arowana right for you?

Arowanas require a great amount of care and a large investment. But they are a truly unique experience, practically an aquatic dinosaur for your home. You won’t find a more terrifyingly beautiful specimen anywhere in the hobbyist world. If you have the budget and space for the massive aquarium they require, and if you have achieved expert status as a fish hobbyist, you may enjoy entering the primeval world of the arowana.