Also called tiger fish, the datnoid fish is an elegant and majestic fish that makes a fantastic addition to any aquarium. It has a tiger-like pattern on its body and stalks its prey in the same way its aptly-named mammalian counterpart does. There are multiple types of datnoids, but other species of fish are often incorrectly labeled as being datnoids without actually being true datnoids.

What size are they when they’re small?

Datnoid fish are unique from other popular types of fish in that they have the same vibrant coloring throughout most of their lifespan. They have three or four stripes on the body and two stripes on the tail fin. They have a tall body with a forehead that slants in sharply, with gold and white coloration throughout the body. In their youth, they are only a few inches long.

How fast/slow should you expect them to grow?

Because datnoid fish have such an extended life span, they usually grow slowly in their first few years of life, reaching a foot long only in about middle age. They will eventually grow to fourteen inches or longer, but this takes quite some time – usually several years or more, and only under proper living conditions.

Datnoids can grow quite large, in some cases growing larger than two feet. In the wild, this is especially true, with datnoids regularly growing larger than eighteen inches. Most datnoids, however, will remain at the more manageable length of a foot or so. Some will reach fourteen inches, but this is rare. Datnoids can live for up to ten to fifteen years in captivity. 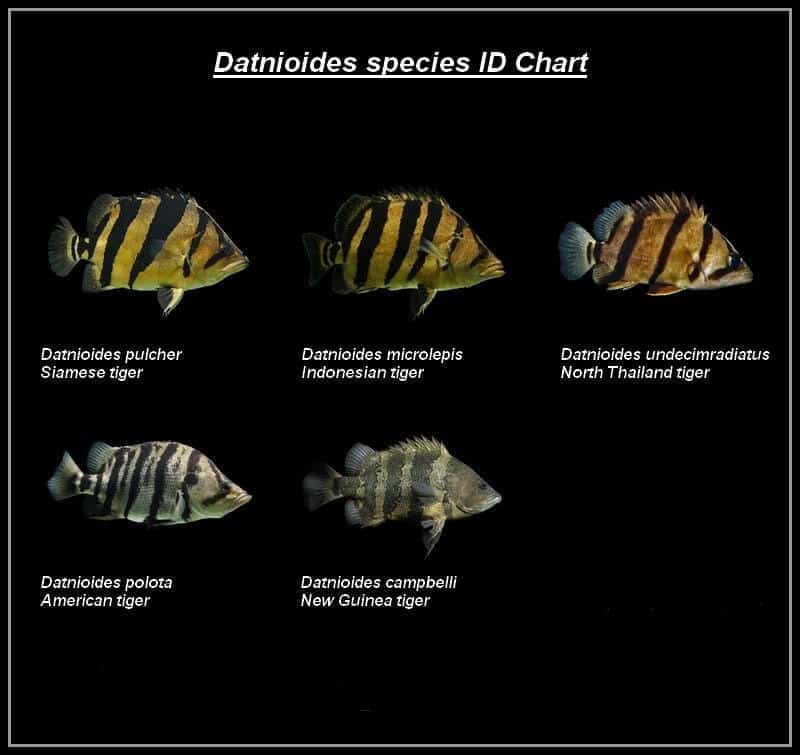 Datnoids are a common choice for aquarium owners for their resplendent looks and tiger-like stripes on the body. However, based on the origin and features, Datnoids can be broadly categorized as given below:

Northern Thailand Tiger Fish or Thin Bar Datnoid: This species is found in the river ways of Northern Thailand and are famous for the broad straight stripes on their body. Also, the bright golden hue can be yellowish at times.

American Tiger Fish or Silver Tiger: Silver Tigers got their names from the silver tone on their body.

New Guinea Tiger Fish or New Guinea Datnoid: This variety is mostly found in the freshwaters of New Guinea islands. They are easy to identify with the wavy pattern of gold and black on their body.

What do datnoid fish eat in the wild?

In the wild, datnoid fish prefer to eat live foods like worms and insects. They will also eat small fish, crustaceans, and other small animals. When given the opportunity, they will also eat things like shrimps, crabs, and snails. Occasionally, they will go after other large fish, but this is rare, as they will usually only attempt to eat fish that are the same size or significantly smaller than they are.

Feed your datnoid fish about once or twice a day. Never feed more than the fish can eat in one feeding. While wild caught datnoid fish will be hard to train to eat commercial fish foods, it is easy to train young fish to eat a number of commercial foods, like pellets, meaty sticks, krill, or silversides. You can also feed them live foods like feeder shrimp, fish, or bloodworms.

What foods are recommended?

Datnoid fish prefer to eat live food, but this of course can be a challenge to a home aquarium hobbyist. Over time, you can teach your datnoid to accept pellets and frozen food. Commercial food or frozen foods may also be fed. That being said, due to their wild instincts, they will much prefer live foods and this can be a challenge to acclimate them to your tank at first.

If you start by feeding them live foods, keep in mind that it may be difficult to convince them to switch to commercial, frozen, or pellet food. You may need to forcibly starve them or introduce competition in order to get them to eat.

Datnoid fish are naturally found in the fresh, brackish waters of southeast Asian countries like Thailand and Indonesia. They prefer freshwater and are native to the Malay Peninsula and Indonesia. They are frequently confused with the Siamese tiger fish, which is found in similar territory.

These fish are naturally found in vegetated areas with plenty of submerged trees and routes. They are often heavily camouflaged, using their striped patterning to allow them to hide as they wait for prey.

Datnoid fish need a minimum of a 150 gallon tank as adults. If you add multiple tank mates, either a fish that’s the same size or larger, you must consider a much larger tank as well. They need lots of open swimming spaces as well as hiding spots. Juvenile members of the species can live in tanks around sixty gallons, but you will need to replace this tank for a larger one overtime. Consider installing a large external canister filter and always include a tight fitting cover, as these fish do jump.

Your tank should also include diffused lighting and some areas of submerged plant roots. There should be moderate water flow, since they are a river-based species. They need excellent water quality to stay healthy and happy, too.

Datnoid fish are sensitive to nitrates, so you must provide plenty of regular water changes. They prefer pH of 7.0 to 7.5, with temperatures around  75 to 80 degrees Fahrenheit. Consider installing a  good water filtration system, as you must have clean water for these fish at all time. They produce a prolific amount of waste compared to other fish, an item worth noting when you are shopping for a filtration system.

Datnoid fish will hide frequently, as a result of their natural shyness, and so you should provide a tank with plenty of natural hiding places. The natural instinct of the datnoid fish is to hide whenever given the chance, such as when frightened or when stalking prey. Add plenty of rocks and plants, particularly grassy plants. These types of plants make it possible for the fish to blend in with its environment, helping it to feel more comfortable.

Datnoids are not only beautiful, but they can also become very domesticated. Since you can keep them for up to ten years (their average lifespan in captivity), your datnoid will grow used to your presence and actually become somewhat tame. Many aquarium hobbyists actually report being able to feed their datnoid fish from their hands.

That being said, datnoids are usually very shy when they are first placed into a new environment. As they become more acclimated, they will warm up and will not hide quite as frequently. Young datnoids tend to be much shyer than their older companions, and will hide frequently behind plants and rocks. 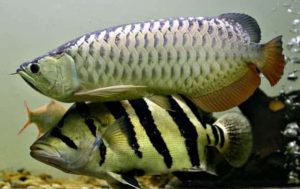 Datnoid fish don’t work well with most other aquarium species, as they have a predatory nature that can make them unsuitable for smaller species. This is because, in the wild, the datnoid hunts by stalking its prey and then using its large mouth to suck the animal in. Therefore, you should avoid any fish that is small enough to be considered prey by the datnoid. Besides this natural hunting behavior, datnoid fish are very docile and won’t generally behave aggressively toward other fish. They will sometimes be a bit aggressive toward new introductions to the tank, but this behavior usually wanes over time, and as the fish get used to each other.

Good tank mates include other semi-aggressive, larger species. It’s a good idea to keep an even number of datnoids to ensure healthy competition and to prevent one from being left out. In the wild, datnoid fish usually hang out in small groups, so keeping groups of four to six will help them remain happier. Consider the following fish when looking for suitable tank mates:

How to Keep Datnoid Fish Healthy

Common diseases to look out for

When stressed, datnoid fish will turn blackish and become unstable. This is usually caused by poor water conditions or overcrowding. Diseases are usually not a problem in a well maintained tank. Since these fish are so resilient, you will likely only notice an illness in one or two fish at a time – if any. You are likely to notice warning signs of disease before anything else.

The most common disease to affect datnoid fish, as with other captive aquarium fish, is ich. This will cause issues like small white spites on the skin, as well as clamped fins. It can be treated with medication and by quarantining affected fish. Tail or fin rot is also not uncommon in datnoid fish. This can be treated by, again, keeping water quality pristine, and also treating with antibiotics like tetracycline or Chloromycetin.

Another common issue in datnoids is that of ocular (or eye) problems. This can be treated with penicillin or amoxicillin, but is generally evidenced by eyes that protrude or seem to be clouded. You can often treat with increased quantities of vitamin A or other pharmaceutical remedies as well.

Disease is rarely a problem with datnoid fish particularly if you are vigilant about housing them in a well-maintained aquarium. If you are doing a good job of keeping the tank clean, you likely will not need to worry about disease or other cleanliness-related problems.

Datnoid fish love to eat, but you need to be careful in feeding them to ensure the water quality of your tank doesn’t become compromised. Water quality issues are the most common problems facing datnoid fish, so if you are feeding large amounts of food, make sure you are paying attention to how much your fish is able to eat. As previously mentioned, datnoid fish tend to defecate in much higher volumes than other types of fish. A good water filter will help keep the water sparkling clean, which is so important for the overall health of your aquarium.

If you choose to feed live foods, you should also be careful with what you are introducing to the tank. Make sure the worms or fishes you are feeding were previously quarantined and that they aren’t carrying any disease.

While it is possible to breed datnoid fish, it is unlikely that you will be able to do so in captivity. While not impossible, there have been no reported cases of tiger fish being successfully bred in captivity or in home aquarium setups.

Datnoid fish are unique in that they will sometimes engage in hunger strikes. This can be combatted by adding other live fish species to the aquarium, particularly those that tend to eat their food quickly. Once your datnoid notices how quickly the other fish are eating their food, he will rapidly follow suit. Consider adding species like Giant Danios or large barbs.

Is a Datnoid Fish Right For You?

Datnoid fish tend to be one of the favorite species for large predatory fish aquariums. They tend to be higher in price than other aquarium fish, making them a steeper investment, but they are well worth the expense.

Although datnoid fish are better for more experienced fish keepers, they can be easy to raise if you know how to feed them and how much space they will take up. Once you are prepared to include them in your tank, you will likely find that they are a good pet to have.

These fish are relatively hardy and can live for many years. With gorgeous coloration and the ability to live in relative peace with other large aquarium species, they are definitely worth considering for your next aquarium purchase.